While most of the Grimaldis were spotted in Switzerland attending Andrea Casiraghi and Tatiana Santo Domingo’s second wedding, Charlene was seen in Monaco attending a soccer match!

So Charlene repeated her black Versace coat that she first wore in 2012 and paired it with her UFO black boots and black skinny pants. I guess she wore the same lipstick she wore to Louis Vuitton’s show last season and I really like scarf.

Later that night, the Princess of Monaco attended the Monte-Carlo Boxing Bonanza in the most mysterious outfits of all time!

This dress and clutch are Akris (despite earlier reports that the dress wasn’t). The earrings are not Graff or Van Cleef and Arpels and the Palace wouldn’t confirm anything…pfft!

Okay, so we move over to the Sochi games…

Albert and Charlene attended the presentation of the Monegasque delegate to the Olympic games. Char wore the Monaco uniform with her Armani flats.

The princely couple attended the opening ceremony, Char wore that jacket (I don’t really wanna know who made it)

After that, the princely couple attended a skiing game.

Charlene von Monaco wore another uniform in black and white. Thankfully, she didn’t leave it at that.

Charlene styled her outfit with some awesome sunglasses.

Char chose the Dior Exquise sunglasses in black (Nice to know I still can ID items), above ( and below) we see it in black and gold.

Finally, Albert and Charlene were back in Monaco the next day (9th of Feb) to attend a football match between AS Monaco and Paris Saint-Germain. Saint-German scored a goal first (probably when this pic was taken) but Monaco scored one later and the two teams tied! Oh, and Char wore her camel Akris coat!

Who -in your opinion- made the Boxing Bonanza outfit?
Facebook – Twitter
P.S: Don’t forget to vote in the poll on the left side to decide which princess to be added on the radar! 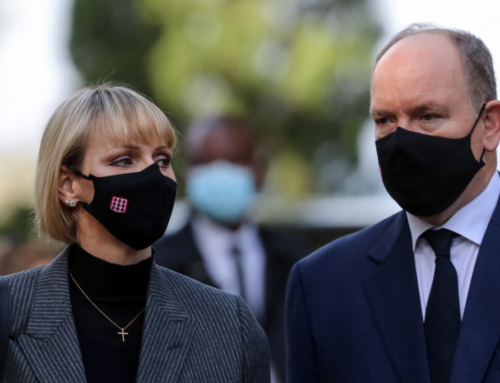